This page contains statistics about the Galaxy Project. This page is updated every January and July, or whenever the project has a grant due, or whenever an advisory board meeting is set to occur.

The Galaxy Help Forum, help.galaxyproject.org, replaced the Galaxy BioStar site on November 29, 2018. It's a brand new site. None of the posts or user data from our old BioStar site were copied over.

Average monthly page views has doubled in the most recent 12 months. During this same time period, the number of new questions and new answers averaged about 75 and 150, respectively, throughout the year. The fact that page views doubled, but questions and answers held steady over 2020 may indicate that the site hit a critical mass of responses: When people visit, they are now much more likely to find that someone has already asked and answered their question.

The number of accounts in Galaxy Help during any month. It reflects newly created and deleted accounts. Note that you don't have to create an account to search the site. You only need an account to engage in some way, such as asking a question, posting an answer, or voting on an a thread. The number of active accounts (accounts that login) each month floats between 150 and 200.

Membership in the two main support channels over time: help.galaxyproject.org and the project's main Gitter/Matrix room.

The Galaxy community uses Gitter.im / Matrix for chat, and there are many different channels, depending upon topic. Here are the channels with 35 or more members.

Here's membership in both channels since they were launched.

Several domain-specific and regional/language-based Galaxy Communities also exist. Here are their numbers as of January 2020.

The Galaxy Publications Library lists every publication we know of that is about, references, or mentions Galaxy. We started tracking publications partway through 2011, so this may be an undercount for that year and previous years.

Here are the tags on papers in the Galaxy Publications Library as of August 2021: 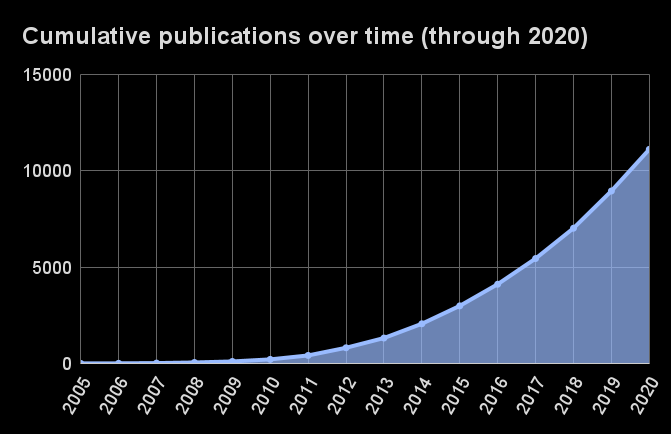 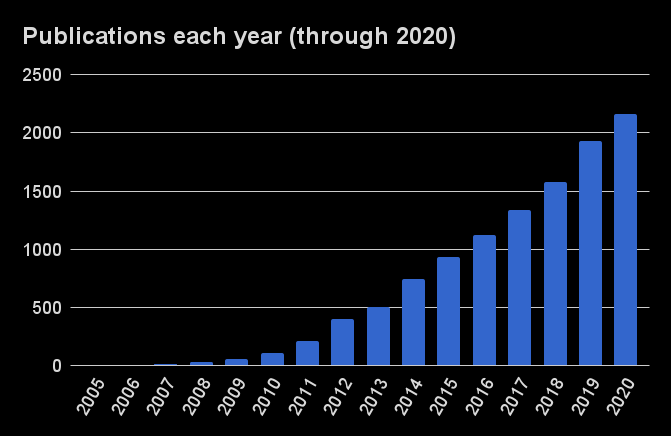 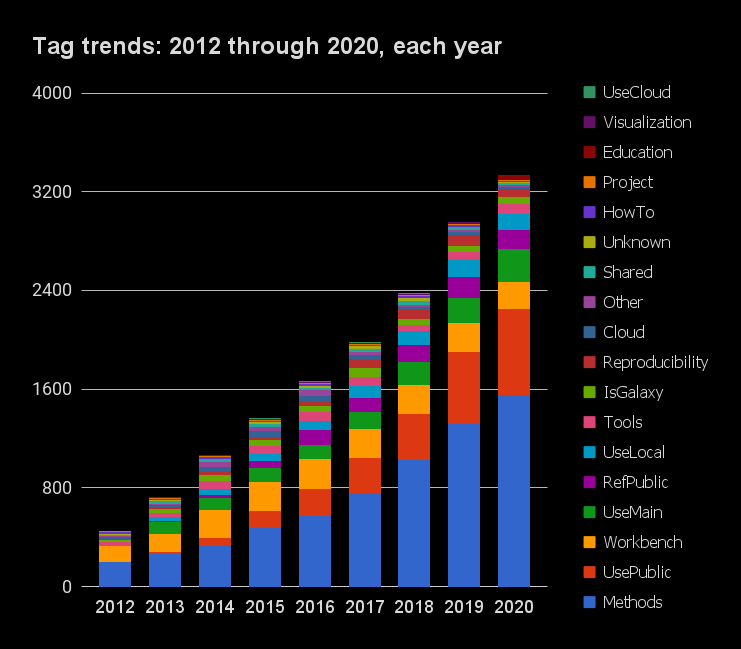 Galaxy is available in a number of ways. While most installations of Galaxy are private, many groups support Galaxy instances in many different forms, including publicly accessible servers, Galaxy instance that can be easily launched on research and commercial clouds, containers, and virtual machines. Prior to 2019 we counted only publicly accessible servers. Moving forward we are tracking many ways to use galaxy.

We are planning a thorough update of this section in 2020.

According to Open Hub:

This is one of the largest open-source teams in the world, and is in the top 2% of all project teams on Open Hub.

The Galaxy Project Tool Shed contains contributed software and workflows that can be installed at any Galaxy site.

As the Galaxy events calendar and archive show, the Galaxy community is globally active, with around 100 events per year for the past several years. Galaxy Community Conferences are the flagship event of the Galaxy community. GCC has met annually since 2010 and has had over 200 participants every year since 2012.

All of the underlying numbers are available as TSV files. Contact Galaxy Outreach if you would like copies.